The analysis shows that the existing protections in England do not align with the coronavirus lockdown tiers and that in some areas, particularly rent and council tax, the lack of broad national protections could see people at risk of falling behind on vital bills. 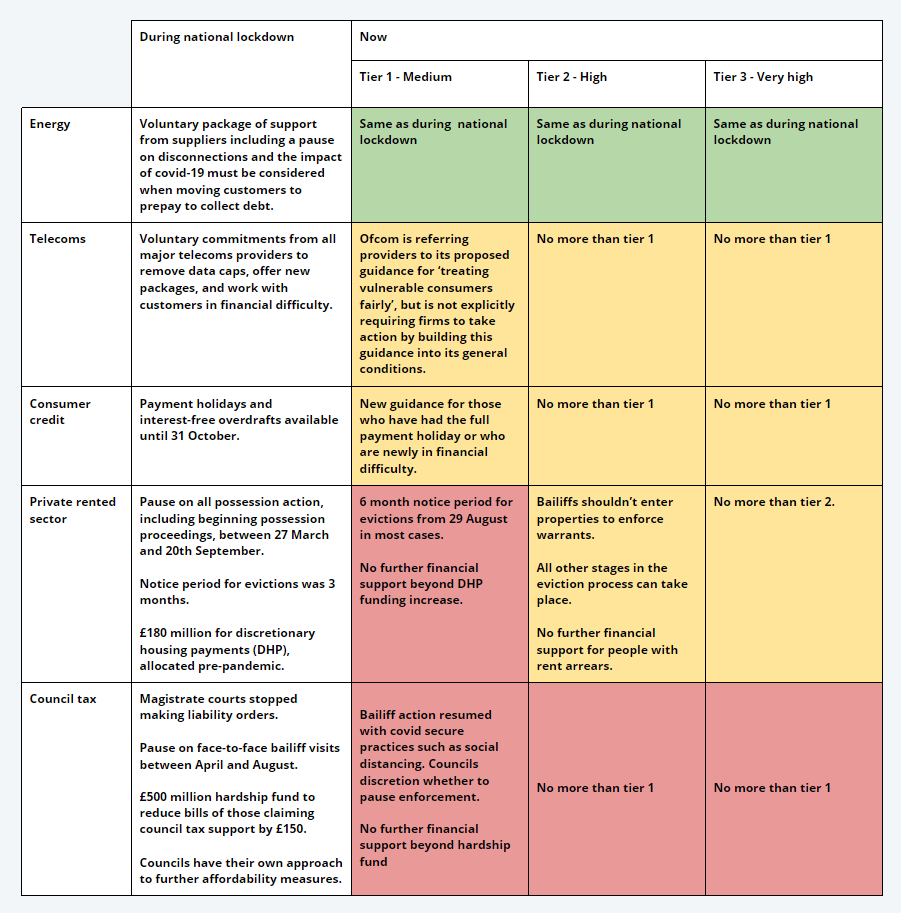 Citizens Advice estimates around 6 million people fell behind on bills during the initial coronavirus lockdown, with carers, shielders, key workers and BAME people most seriously affected. The charity says the government must act now to ensure people aren’t pushed into further debt as restrictions tighten once again.

“Now that many of the protections have been lifted, we’re seeing a surge in people contacting us for help as bailiffs, debt letters and eviction notices start up again.

“Added to that, there have been a lot of redundancies announced in recent weeks and many people we help are working reduced hours because of the impact of the first lockdown.

“If we move into the “Very High” tier without further protections in place, I’m worried about a perfect storm where people already struggling to keep their head above water financially are going to really suffer.”

“We’re also seeing lots of people whose income has dropped to nothing as they self-isolate. They’re hugely worried about the possibility of missing vital bills or running up rent arrears.”

“Many of the protections that the government and regulators rightly put in place for people struggling with bills have ended or are running out. But lifting these protections was founded on the prediction that household finances would improve as the UK left lockdown. For many in the highest tier of coronavirus restrictions, this will now simply not happen.

“Some regulators, like Ofgem, have been proactive in strengthening protections as we enter what is likely to be a hard winter for many. In other sectors, help for people living in the areas of strictest lockdown is confusing, inconsistent and, in some areas, inadequate.

“As more parts of the country move into the highest tier of coronavirus restrictions, a renewed package of protections and support is vital to keep people living there from falling into further debt.”

Citizens Advice is calling for:

Last week new research from Citizens Advice showed significant numbers of people risk being pushed into a position where they can’t pay their essential bills and could face spiraling debts if the uplift to Universal Credit and Working Tax Credit is not extended beyond April 2021.

The findings come from the report Life on Less than Zero.

In August, Citizens Advice found one in 9 people, the equivalent of 6 million people across the UK, have reported falling behind on household bills because of coronavirus.

You can find out more about which cookies we are using or switch them off in settings.

This website uses cookies so that we can provide you with the best user experience possible. Cookie information is stored in your browser and performs functions such as recognising you when you return to our website and helping our team to understand which sections of the website you find most interesting and useful.

Strictly Necessary Cookie should be enabled at all times so that we can save your preferences for cookie settings.

If you disable this cookie, we will not be able to save your preferences. This means that every time you visit this website you will need to enable or disable cookies again.

This website uses Google Analytics to collect anonymous information such as the number of visitors to the site, and the most popular pages.

Please enable Strictly Necessary Cookies first so that we can save your preferences!